TAIWAN – 4 September 2019 – The world’s first BEFULL HUB held its opening ceremony and press conference in New Taipei City on September 3. The first BEFULL HUB was jointly set up by the BeFull Community and Sensory café, the midnight cafe brand in Taiwan. Witnessed by industry leaders among the Mainland, Taiwan, Hong Kong and Malaysia, a new era of blockchain traffic will be officially launched by BEFULL HUB of BeFull Community. 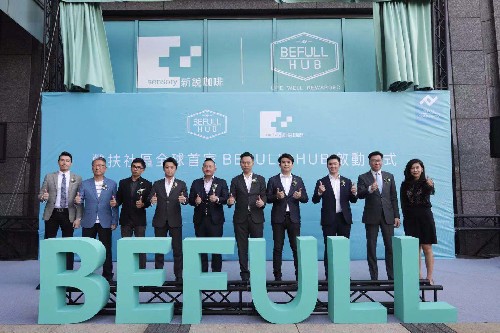 At the opening ceremony，Vincent Chueng, CEO of the BeFull Community, and Kevin, the founder of Sensory Cafe and Polo Lee, the partner of BEFULL HUB delivered speeches respectively. “The BeFull Community has become the world’s leading Chinese blockchain community. Its strong community consensus and innovative ecosystem have shown significant application value, attracting either Sensory Café who is seeking for change and development or even Taiwan where is exploring to be a ‘blockchain island’ ” said Kevin.

“The active online community members in Taiwan could get more direct and effective offline experience, like communicating meetups, business receptions, brand promotions and many other BEFULL HUB activities through this cooperation, which will also enrich the innovative operating ‘Business + leisure’ model of Sensory Cafe.”

In recent years, the New Taipei City Government has been committed to assisting small and medium enterprises (SME) in traditional industries to introduce new technologies for transformation and upgrading. The government has established a “blockchain promotion office” to accelerate industrial upgrading and facilitate international cooperation.

“As a forerunner in the industry, Sensory Cafe has many similarities with BeFull Community in terms of operating ideas and models. With the era of interconnectedness coming, people’s lifestyles and industrial ecological development have presented more complex integrations together. It’s believed that taking the advantages of the decentralization, open-sourcing, immutability and other characteristics of blockchain to combine its technology with the traditional economy will bring more sharing experiences to consumers, and empower the transformation of traditional business ecosystem.” Vincent Cheung, CEO of BeFull Community, addressed at the ceremony.

The BeFull Community has a deep understanding of the strong demand of the members for more diversified resource docking and more realistic interaction. The first BEFULL HUB officially kicking off in Taiwan will lead the community to create a new model for the offline economy in the blockchain. In the future, BeFull Community will continually focus on building blockchain urban traffic centers to form a global value alliance with cohesion and fission effects.