SINGAPORE – 22 August 2019 – Spackman Entertainment Group Limited (“Spackman Entertainment Group” or the “Company” and together with its subsidiaries, the “Group“), one of Korea’s leading entertainment production groups founded by media investor Charles Spackman, wishes to announce that the Group’s upcoming film, JESTERS: THE GAME CHANGERS, produced by the Company’s wholly-owned subsidiary, Simplex Films Limited (“Simplex Films“), opened #3 at the Korean box office on the first day of its wide release on 21 August 2019. 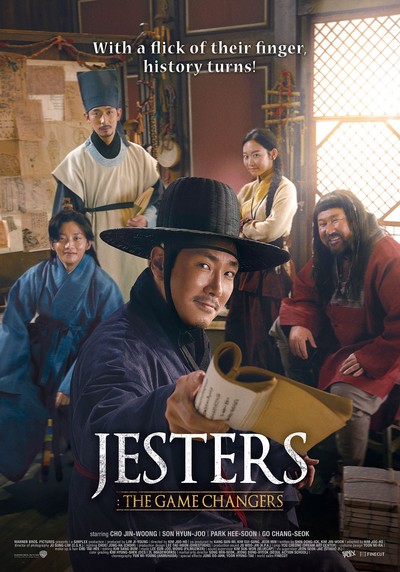 According to the latest statistics from the Korean Film Council, JESTERS: THE GAME CHANGERS recorded total ticket admissions of 87,124 with gross box office revenue of US$591,383 on its opening day, 21 August 2019. The film was released on 804 screens and captured 18% of the nationwide box office market share for that day.

JESTERS: THE GAME CHANGERS, is a historical comedy film, starring Cho Jin-woong of INTIMATE STRANGERS (2018) & THE SPY GONE NORTH (2018) and Son Hyun-joo of ORDINARY PERSON (2017). The movie revolves around the story of a ‘gang of clowns’ that manipulates rumours throughout the country and stirs the public. The ‘gang of clowns’ is discovered by Han Myung-hoe (played by Son Hyun-joo), the most powerful man in Joseon, and creates legendary stories about King Sejo (played by Park Hee-soon).

Distributed by Warner Bros. Korea, the total estimated production budget (including prints and advertising costs) for JESTERS: THE GAME CHANGERS is KRW13.5 billion (or US$11.5 million).

The Group believes that starting with JESTERS: THE GAME CHANGERS, Simplex Films is on track to continue adding quality films to the Group’s movie production business.

The latest daily statistics from the Korean Film Council (http://www.koreanfilm.or.kr/eng/news/boxOffice_Daily.jsp?mode=BOXOFFICE_DAILY) on the performance of JESTERS: THE GAME CHANGERS are updated on the Group’s website at http://www.spackmanentertainment.com.