JAPAN – 9 September 2019 – For DHL Global Forwarding, the final lap for the Red Bull Air Race World Championship commenced a month ago, when 22 containers of race equipment began their ocean-bound journey with the leading international provider of air, sea and road freight services. 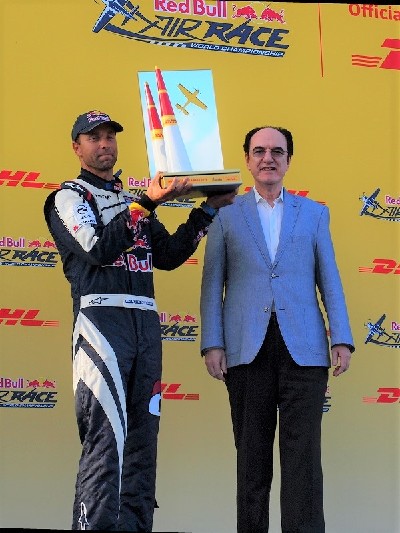 By the time that DHL awarded the “Fastest Lap Award” on Saturday, September 7 — given to Martin Šonka, the pilot who achieved the fastest time on a single lap of the racetrack — the logistics provider has transported nearly 400 tons of freight including airplanes, hangars, pylons, and anchors for the World Championship’s final event in Chiba, Japan.

“The Chiba race marked the exciting end to 14 years of a sport unmatched in the world of aviation,” said Erich Wolf, General Manager of Red Bull Air Race GmbH. “From the beginning, the Red Bull Air Race has always been about advancing the boundaries of what’s possible. From season to season we have done just that — with the progression of our pilots and teams, with ever-more sophisticated racing technology, and by finding solutions for the operational complexity of staging this dynamic series. We’re incredibly grateful to our partners for helping us to deliver an exciting climax in Japan, including DHL Global Forwarding for giving us a rock-solid logistics and supply chain foundation.”

For the final race in Chiba, DHL Global Forwarding transported more than 240 tons of race equipment via ocean freight from the USA, Netherlands, and Austria, while 155 tons of time-sensitive cargos like planes and parts were shipped in from the previous race at Lake Balaton, Hungary in less than 12 hours. The process saw DHL manage all customs, documentation, and last-mile trucking of its cargo — ultimately involving more than 130 vehicles — to ensure the utmost degree of compliance and safety for pilots and race visitors alike.

“Over the past five years, we’ve refined our logistics solution for the Red Bull Air Race to add as much certainty as we can to the highly variable operating environment in which the motorsport series is staged,” said Charles Kaufmann, President/Representative Director — DHL Global Forwarding Japan K.K. and CEO — DHL Global Forwarding North Asia/South Pacific, who presented the iconic DHL Fastest Lap Award trophy at the culmination of the 2019 World Championship. “With the global sports market expected to see accelerating growth in the next three years, driven predominantly by growth in Asia Pacific at nearly 10 percent per annum, we believe demand for high-intensity sporting events and the necessary logistics solutions will only continue to rise. That gives considerable cause for optimism even as we bid farewell to the iconic Red Bull Air Race this year.”